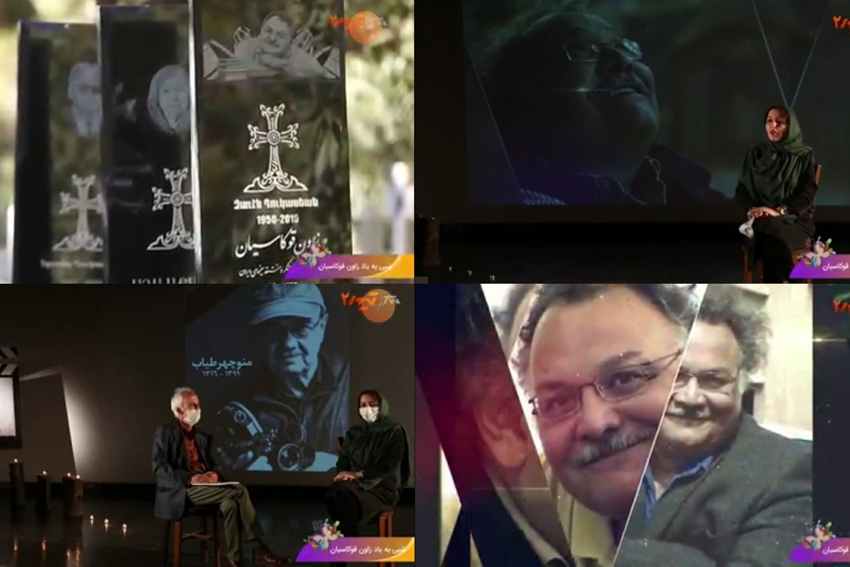 “Night of Zaven” – Zaven Ghokasian’s commemoration – was virtually held on the third day of the 33rd ICFF.

According to the 33rd ICFF Public Relations Office, “Night of Zaven” – Zaven Ghokasian’s commemoration – was held on Tuesday night, October 20, 2020, in Isfahan. The event was shown on tva.tv., and children could watch it online on the ICFF page.

The event began with a video about Zaven Ghokasian. The video included the artist’s friends and students talking about him.

Heshmatollah Entekhabi referred to Zaven’s impact on Isfahan’s art and said, “Isfahan is gloomy without Zaven. He had a vital role in Isfahan’s art.” He added, “Zaven made Isfahani children fall in love with cinema.”

Majid Sheida, a young filmmaker, a student of Zaven’s, and the collector of “Another Chapter with Zaven” talked about this book. He said, “I started to think about the book in May 2009 in the House of Artists in Isfahan. I saw Zaven while having an interview, and I wondered why we hadn’t thought about writing about Zaven. I asked him to let me have an interview with him. I couldn’t expect what his reaction would be like, but he was very welcoming. We had our first meeting at Zaven’s home. I started to collect information about him and decided to find out where his passion for cinema came from.”

The event also paid tribute to the late Manouchehr Tayyab. Referring to Manouchehr Tayyab, Isfahani artist and a friend of Zaven’s, Gholamreza Mohaymen, said, “Love was evident in all of Manouchehr Tayyab’s works. He didn’t care about what happened to his works, and he was satisfied even if his works were shown on TV.”

The event proceeded with a film of Manouchehr Tayyab’s speech about Zaven Ghokasian.  Tayyab mentions, “Zaven was a kind professional man. I couldn’t believe I had to say goodbye to him even when the doctors told him that he had to stay with his family. I haven’t forgotten his smile although he hasn’t been with us for four years. Zaven was an active man. He wrote articles and spent time with filmmakers. “Night of Zaven” is not only a night to pay tribute to Zaven, but it is also an opportunity to remind young people that they should all be like Zaven.”

While unveiling the statue of Zaven Ghokasian, the mayor of Isfahan, Ghodratollah Norouzi, stated, “Ghokasian is a well-known figure in Isfahan, and everybody loves him.” Jafar Najibi, the sculptor, said, “I tried to illustrate Zaven’s kindness in the statue.”

The secretary of Zaven’s Award, Siavash Golshiri said, “Back in 2018, the policy-making council of the ICFF decided to add this award to pay tribute to Zaven. This year, the films are going to be watched online, and a film is going to be selected to win Zaven’s Award.”