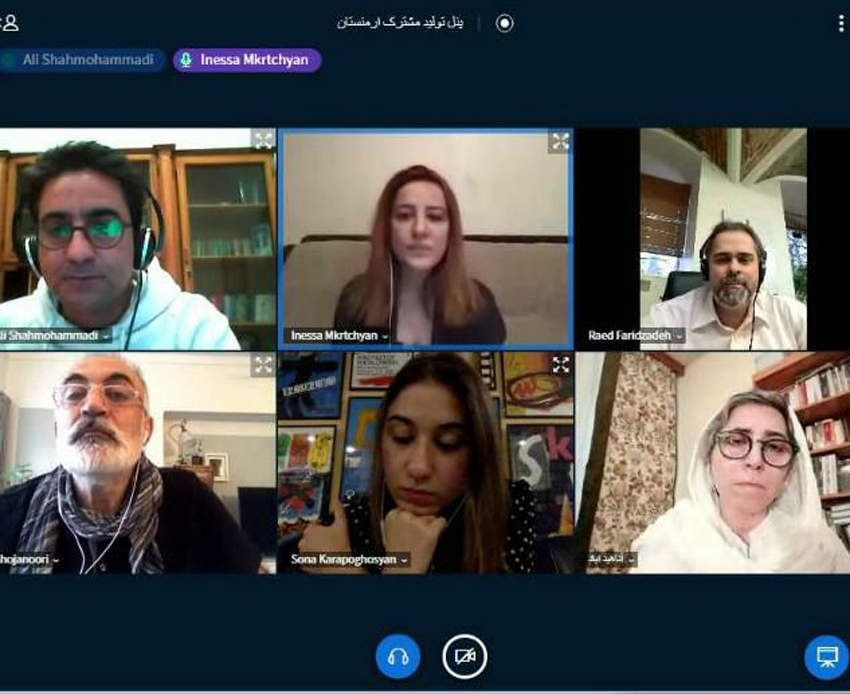 Welcoming the participants, the Head of International Section of the 33rd ICFF, Raed Faridzadeh, referred to the cooperation between Farabi Cinematic Foundation and National Cinema Center of Armenia for the production of “Yeva” by Anahid Abad, and pointed out that there were great talks between the two countries both in Fajr Film Festival and in Berlinale Film Market for closer collaboration at GAIFF Coproduction Market. However, due to the pandemic outbreak the process has slowed down.

Referring to Anahid Abad’s future film as another Iranian-Armenian coproduction project, Faridzadeh said, ‘we are looking forward to greater cooperation between the two countries regarding film coproduction and we are ready to discuss the ways’.

The Armenian film director and producer, Inessa Mkrtchyan, talked about a documentary as her first experience of coproduction with France. She considered “Yeva” as the most successful coproduction project between Iran and Armenian, but stressed that there is no official cooperation agreement or legally binding contract between Iran and Armenia in that regard. She referred to the contracts and agreements National Cinema Center of Armenia has with other countries of the world and emphasized that the same thing needs to happen with Iran.

Regarding the challenges she has faced in the process of coproducing a film, Mkrtchyan said, ‘I have not faced a particular challenge yet. I have not met many Iranian filmmakers to discuss coproduction with, and that can be considered a problem. But, after making five documentaries, my first coproduction experience is a wonderful one. When you are coproducing a film, the significant thing is that no one is superior to others. The thing that matters is to make a good film, and to achieve this goal, we should work collectively’.

The Head of GAIFF Coproduction Market, Sona Karapoghosyan, explained about the Coproduction Section which was added to Golden Apricot International Film Festival in 2018 and filmmakers from Caucasia Region, Azerbaijan, Turkey and Iran are invited to send their film there. ‘The Jury members are selected from countries other than the ones in the region and 3 projects from each country are chosen in the end. Then the selected directors are invited to Yerevan to have meetings with producers and an award is also given to a project which has great potential for coproduction’, she added.

She also talked about sponsorship and financing films in Armenia and mentioned the two calls for films by National Cinema Center of Armenia during a year and financing them in that way. She referred to an award of nearly $ 2,000, given by the Prime Minister, as well.

The Iranian producer, Alireza Shoja Nouri, elaborated on his 20-year experience of film production as well as his experience of introducing Iranian films to international markets and stressed that, ‘regarding coproduction, financing and sponsorship are not the only significant factors. Discovering mutual tastes and interests is of great importance, too. If the latter is done, the former will happen much more easily’.

He focused on the lack of knowledge about one another despite a lot of common customs and cultural similarities between Iran and Armenia and said, ‘such knowledge can be gained in common markets. Knowing film producers and their productions in different countries is also a prerequisite for coproduction. We should come together and think of an idea’.

Iranian director, Anahid Abad, talked about her many years of cooperating with the Armenians on different Iranian projects. ‘Yeva is a good example of coproduction in its real sense, and funds and resources of both countries were properly and collaboratively employed’, she said.

She also referred to a mutual cooperation agreement between the Managing Director of Farabi Foundation, Alireza Tabesh, and Armenia in 2017, which can be considered as a legal basis for coproduction. In addition, addressing the shared cultural and historical background Iran and Armenia have, Abad pointed out, ‘based on these shared values, we can cooperate in the realm of cinema as well. There are considerable potentials in both counties making use of which can lead to great results’.

Faridzadeh appreciated the great ideas the guests presented in the panel and said, ‘lack of a legally binding contract or agreement between the countries is undeniable, and the reason is that it takes time as it concerns the governments and parliaments in both countries. There has only been a Statement of Mutual Understanding between National Cinema Center of Armenia and Farabi Cinematic Foundation’.

In the end, Faridzadeh expressed hope that holding such panels can initiate the use of existing potentials for higher levels of coproduction.