Regulations and Call for Entries 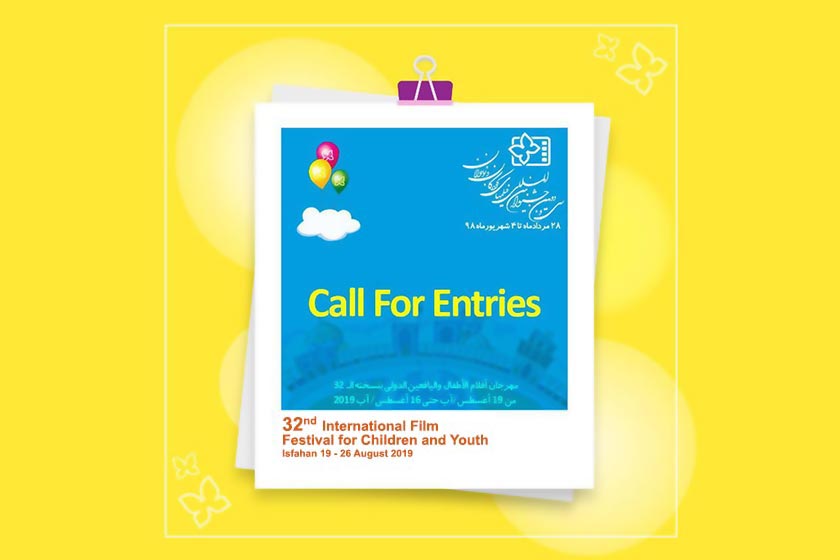 The 32nd International Film Festival for Children and Youth has announced its regulations and call for entries aims to enhancing the cinematic products of this age bracket and introducing the top works in national and international arenas.

According to 32nd International Film Festival for Children and Youth’s news headquarters of,

The International Film Festival for Children and Young Adults (ICFF) is organized annually by the Iranian Organization of Cinema and Audiovisual Affairs, Farabi Cinema Foundation and the Municipality of Isfahan. The 32nd edition of this prestigious event will be held in the historic city of Isfahan from August 19th to 26th, 2019.

C) Boosting collaboration and production of films for children and young adults by creating interaction among creators, experts and the audience

A) Promoting knowledge transfer and exchange of products of high artistic value, capable of contributing to cultural and social growth

OFFICIAL SECTIONS OF THE FESTIVAL

An international jury consisting of two Iranian and one International member appointed in coordination with the rules & regulations of CIFEJ, will award the Best Feature Film and offer an Honorary Diploma to a short film (fiction or animation).

A group of international children and young jurors selected by the Festival’s Administration office will award the Golden Butterfly to the Best Feature Length Film.

In this edition of the festival, the director will grant special awards to the films focusing on innovative ideas, cultural consistency and those with business potentials. It is noteworthy to mention, “Cultural Consistency” refers to a film’s capacity to enter into adjacent markets and industries, turning them into a combination of cultural works.

Due to the growth of Social Media Networks and the effort to grow the production of domestic content for children and young adults as a national mission, in this edition of the festival a special section is dedicated to the production of Web Series.

In this section, the golden trophy of the first young martyr of the imposed war on Iran (Holy Defense) is dedicated to a producer or director of a film focusing on themes such as sacrifice, resistance and Islamic values.

A group of Iranian children and young jurors selected by the Festival’s Administration office will award the Golden Butterfly to the Best Feature Length Film.

In this section, a panel of jurors consisting of film critics, cultural and cinematic activists and cineastes from Isfahan (selected by the festival office), will offer the Best Film Award in the Iranian cinema section.

In this non-competitive section, several films of prominent filmmakers or a collection of feature films with a common theme selected by the Festival Director will be showcased.

An independent panel of Jury members for the international and national competition sections comprising of at least 5 prominent filmmakers, producers and cineastes will be selected by the Festival Director .
Jury members shall not have any contribution to selected works in the competitive sections.
A representative introduced by the Festival Director will attend the jury sessions without any voting right.

– All films submitted should be suitable for children and young adults

– Only films produced after January 2017 are eligible for submission

– All films that will be screened in the festival competitive sections, will receive certificates of participation

– In case of any shipment, all in-bound and out-bound costs shall be covered by the submitter/participant

– Once the film has been selected and confirmed, the film cannot be withdrawn from the festival program

– Participation in the festival implies acceptance of all aforementioned regulations

– The deadline for the delivery of the hardcopy or link of selected movies is August 6th,2019

– All Submissions Must Contain the Following:

– A digital copy of the film with English subtitles shall be submitted before July 6th, 2019

– Alternatively, submissions can be sent by mail, containing a copy of the completed entry form and the screener in mp4 file-format, labeled with the film’s title and director’s name

– The English dialogue list of the film shall be sent via email along with the screener.

– In special cases, based on previous agreement, one of the following formats can be accepted:

• Selection and participation in one of ICFF’s competitive sections entails unconditional acceptance of the festival rules & regulations. Only the producer, distributor or any authorized party of the film is entitled to submit the film.

• The abovementioned regulations have been drawn up in both Persian and English languages. If problems of interpretation shall arise, the Persian version of the regulation will prevail.

• The board of management of the ICFF is entitled to take decisions that are not foreseen in the above regulations and to modify them unders special circumstances.

International Festival of Films for Children and Youth