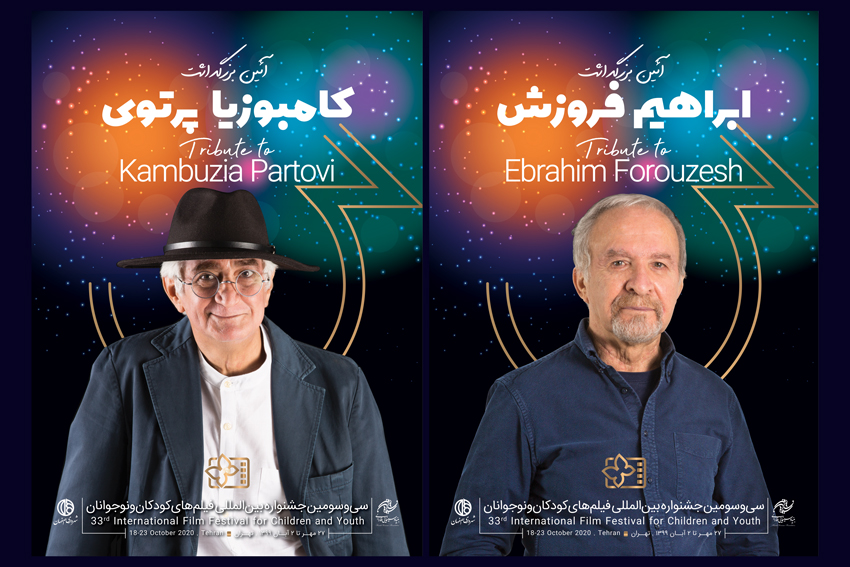 Tributes to Ibrahim Forouzesh and Kambuzia Partovi will be paid at the 33rd ICFF.

According to the 33rd ICFF Public Relations Office, born in 1939 in Tehran, director and screenwriter, Ibrahim Forouzesh is a direction graduate from the Faculty of Dramatic Arts. His artistic career began in 1970 at the Institute for the Intellectual Development of Children and Young Adults as the supervisor of the cinema center. He began his cinematic career in 1973, writing the screenplay for a short film called “Black Bird” directed by Morteza Momayez. He has also written the screenplays for some animated films made by Ali Akbar Sadeghi, Abdullah Alimorad, etc., made 8 feature films, and written the screenplays for two feature films made by other filmmakers.
Director and screenwriter, Kambuzia Partovi, was born in 1955 in Rostam Abad, Gilan. He is a graduate from the Faculty of Dramatic Arts. He began his artistic career, making short films in Damavand Free Cinema. His cinematic career started with a film called, “Glasses” and a TV series called “The Green Frog” made for channel 2. His collaboration with Abbas Kiarostami in making “Where’s the Friend’s Home?” is a notable achievement in his career. He has made 6 feature films and written the screenplays for 14 feature films and won a lot of national and international awards in more than three decades.
Due to the outbreak of the new coronavirus and based on the multimedia agreement made by the Iranian Cinema Organization, Farabi Cinematic Foundation, and Isfahan Municipality, this edition of the festival will be held virtually from October 18 to 23, 2020 under the supervision of Alireza Tabesh.
The festival will be organized in a competitive format in two different sections; Iranian Cinema Competition and International Cinema Competition.