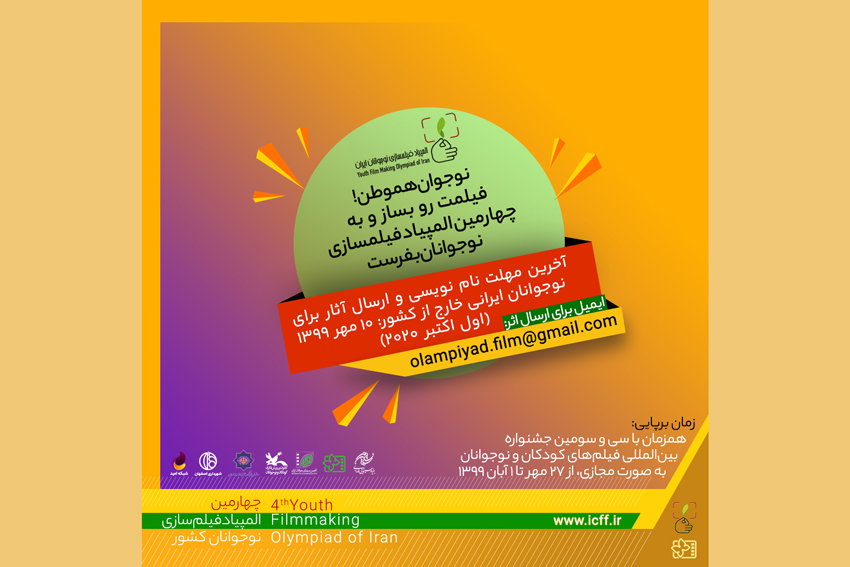 Iranian Teenagers Abroad Will Be Able To Present Their Movies in The 4th Iranian Youth Filmmaking Olympiad.

The 33rd ICFF Public Relations Office reports, the call for Iranian teenagers abroad participation in the 4th Youth Film Festival has been published in cooperation with the Islamic Culture And Communication Organization and based on it, 12 to 17-year-old teenagers (born between 2004 and 2009) will be able to participate in the 4th Iranian Youth Filmmaking Olympiad.

According to the call, Iranian teenagers abroad can send their work to olampiyad.film@gmail.com only in the 5-minute short movie part on the earlier determined subjects (teenagers’ desires for the future of their country, city, or family, best movies and books for teenagers, and their experience, coronavirus lessons for a better future, coronavirus: a chance or a threat?) and the last chance to register and send their work is Oct 1st.

The Iranian Youth Film Making Olympiad is also grateful for all Iranian teenagers who participated from all over the world, meanwhile announced that by September 13th, over 550 pieces of work in the ideas and films section have been submitted to the secretariat and that Iranian teenagers from different cities will only be able to send theirs, by the end of Sunday 20th of September, and there is a zero chance this deadline will be extended.

According to this piece of news, “The 4th Iranian Youth Film Making Olympiad” will be held by The Farabi Cinema Foundation and The Iranian Youth Cinema Society (IYCS) in cooperation with The Institute For The Intellectual Development of Children and Young Adults, Islamic Culture and Communication Organization, Isfahan Municipality and Omid Channel, coinciding with the 33rd Virtual International Film Festival For Children And Youth, from 18th to 23rd of October.