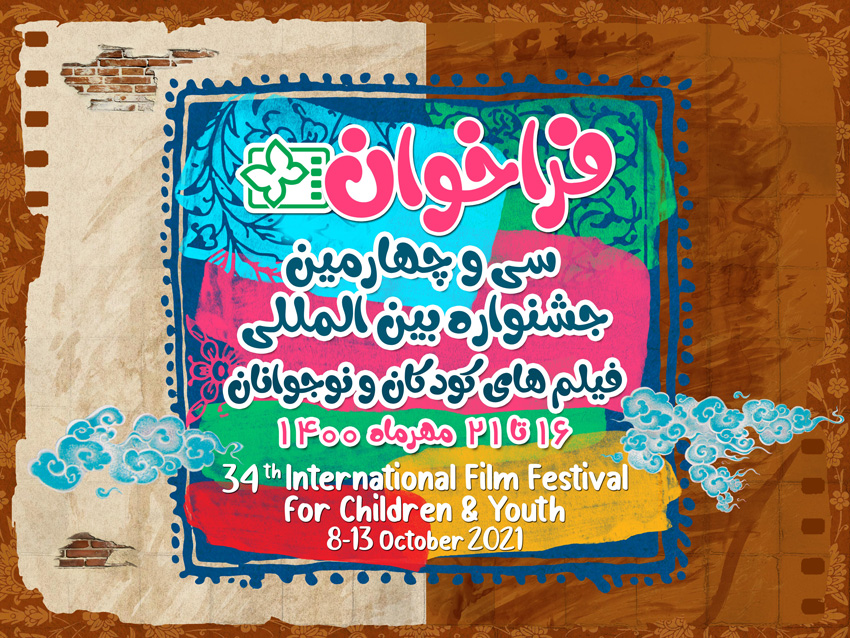 34th International Film Festival for Children and Young Adults will be held from October 8 to 13, 2021 with the participation of the Iran Cinema Organization, Farabi Cinematic Foundation and Isfahan Municipality.

In order to promote cultural justice in the country, also with the consent of the National Anti-Corona Headquarters, the festival secretariat can screen the films of this cultural event at the request of the General Departments and offices of Culture and Islamic Guidance, in any of the applicant provinces. This edition of the festival, considering the continuation of the global outbreak of Covid-19 virus in interaction with the National Anti-Corona Headquarters, will be held in person and online, simultaneously in Tehran and Isfahan in a competitive format in both national and international sections. Prizes will be awarded to the winners as follows.

* In this section, only those series of films and works that have the ability to attract children and young adults in terms of content and narrative style will be accepted.

1) The Golden Butterfly of the best film (including animation, live and puppet) to the producer

2) Golden Butterfly of the Best Director

3) Golden Butterfly for the best feature film (to the Director)

6) Golden Butterfly for the best technical or artistic achievement

7) Golden Butterfly of Special Award of the Jury Board

9) Zaven Ghokasian Award (to the Director)

In this section, the series of works of international cinema that are in line with Iranian Islamic culture is selected based on the specialized opinions of cineastes. It should be noted that three prominent Iranian films also compete with other works.

The jury board consisting of cultural characters and cineastes will award the following prizes;

1) The best film (including animation, live and puppet) to the producer

5) The best technical or artistic achievement

9) Cifej Award (to the Director)

1) Selecting the films, whether Iranian or international, is done by the festival headquarters.

3) All films will be classified for screening in two age groups: children (6 to 9 years old) and young adults (10 to 15 years old).

4) It is necessary that the time duration of the films to attend the festival have the following conditions;

– Short films, whether real or animated (minimum 3 and maximum 20 minutes)

5) It is necessary that the date of production of Iranian films is from  2019 onwards and international films from 2020.

6) It is necessary to submit a copy and the original license of Iranian films.

7) Taking into account the conditions and requirements of the time, the necessary decisions regarding the details of the festival will be announced by the Secretariat.

Sending Films to the Festival:

1) To submit the original version, applicants must first register on the festival website at www.portal.icff.ir and enter the relevant film as a link; Or send a copy of the film as a DVD (Flash memory-Blu-Ray or external hard drive) to the festival secretariat. It should be noted that if the producers have problems registering in the festival system, they can call 09386502824.

2) It is mandatory to provide a personal photo and a director’s note about the film, biography, filmography, a few photos of the film, posters, brochures, tracts (trailers or a maximum of three minutes of the film).

3) Iranian films accepted in the international section will be required to submit a subtitle (English).

4) The deadline for registration in the festival and presentation of the film (whether Iranian or international) will be 22 August 2021.

5) The deadline for delivery of the original version of the accepted film is September 21, 2021.

6) In order to respect the audience, if the final version is not submitted on the deadline, the festival secretariat will exclude the film from all announced programs.

7) Planning the screening of accepted films is the responsibility of the festival secretariat.

8) Registration and delivery of the film is considered as full acceptance of the rules and regulations of film screening in Iran.

9) Information is provided only through the public relations of the festival.

10) Interpretation and making the final decision on unforeseen cases is the responsibility of the festival secretary.

The version of the rules is set in three languages: English, Arabic and Persian, and in interpreting and explaining the rules, the Persian version will be the standard of judgment.