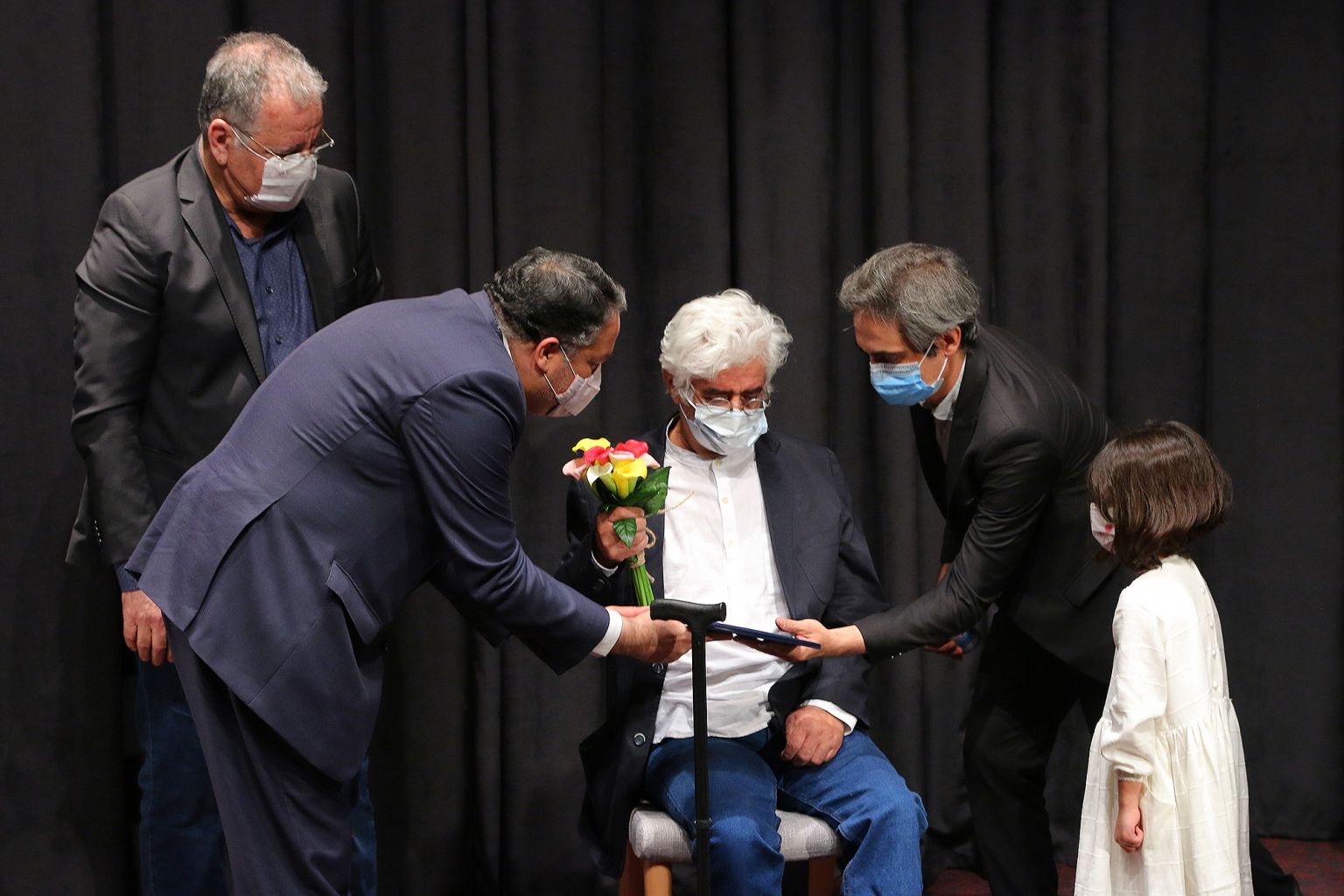 The ceremony to honor Kambuzia Partovi and EbrahimForouzesh was held with the Festival Director, Alireza Tabeshand a group of cinematic figures on Thursday October 22, at Kiarostami Hall of Farabi Cinematic Foundation under strict health protocols, the 33rd ICFF Public Relations Office reports. 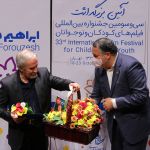 To begin the ceremony, some verses of Quran were recited by the young reciter, Mehdi Qorbanian, followed by the Iranian national anthem, the 33rd ICFF teaser video, a video clip about “children and COVID-19” and a video report on the preparations for the ceremony.

The festival’s opening music piece was then performed by Sardar Sarmast on accordion and Shaghayegh Sadeghian on flute, along with a selection of musical notes from animated films and TV programs for children.

The ceremony was presented by Nima Karami, Zeynab Zare’ and their children Nil and Mohammad Kiamehr Karami. NimaKarami pointed out that they were on stage as a family to show that ICFF belongs to Iranian families and it should have all family members as its audience. Zeynab Zare’ referred to her memory of watching the movie “Golnar” as a child and expressed hope that the younger generation will also be fortunate enough to see such fine and fabulous films.

The festival director, Alireza Tabesh, was then invited on the stage. He greeted everybody and said that it was such a great pleasure for this edition of the festival to get a chance to honor Kambuzia Partovi and Ebrahim Forouzesh.

He described Ebrahim Forouzesh as an artist with sharp eyes and a kind heart who turned the simplest themes in children’s world into excellent cinematic works. ‘All this has made him to be seen as a seasoned and caring grandpa around whom children love to sit and to whose stories they enjoy listen to, stories in which the heroes are children who have to take responsibilities so heavy for their shoulders or try to fulfill their dreams in a world of bitter reality. Forouzesh is a man from the world of adults to represent hopes and dreams of children who have been taken for granted, Tabesh said.

He referred to Forouzesh’s cinema as a vibrant world, full of adventures and stories which let the audience feel more secure and lively. ‘He is that mediator, that connecting link joining the world of children to that of adults’.

Focusing on Kambuzia Partovi’s incredible talent in storytelling and his mastery over techniques of narrating, Tabesh reviewed his cinematic background which started with children’s films and thrived with them as well. ‘He is a bewitching narrator who always has something up his sleeve. He may be that missing puzzle piece that our cinema needs to be revived once again. He might have found a magic potion which helps him seem like sharp and creative young boys although he is an adult. He is the narrator of a world which we have lost in the hustle and bustle of today’s life. He is the guardian of the images which bring happiness to the darkest times of our lives; and with people like him, our busy world has definitely become a better place to live’.

In the end, the festival director thanked the audience for their presence and participation in the ceremony and once again expressed gratitude for the presence of the esteemed guests the ceremony was held to honor.

A video clip made by Majid Tavakoli was shown followed by a music piece from the movie “Golnar” to prepare the stage for Kambuzia Partovi to walk on the stage.

Kambuzia Partovi thanked several people, including his wife, Nasrin Moradi for her support and for being his lucky charm and the festival director, Alireza Tabesh for his attempts to keep the festival lights on.

The young musician, Diana Tabatabaii, then, played a piece on flute to pay homage to Partovi, and Rasoul Sadr Ameli joined Tabesh on the stage to honor Partovi. Sadr Ameli referred to his 30 years of collaboration with Partovi and emphasized that he owed a lot to him. He also asked everybody in cinema industry to work as one body and to be grateful for having each other.

Partovi’s collection of works decorated as a flower basket was then unveiled and he received a tribute diploma and signed his photo.

Ebrahim Forouzesh was then invited on the stage and Tara Rostami played the Violin to pay homage to him. He talked about the pleasure he had to be a jury member in this edition of the festival and referred to the hard job they had to choose among the good works. He also paid tribute to late Akbar Alami, Khosrow Sinai and Mohammadreza Shajarian, and hoped that such ceremonies will always be held when people are still alive. He referred to the activities done by the Institute for Intellectual Development of Children and Young Adults and wished for better days to come.

The CEO of Iran’s House of Cinema, Manouchehr Shahsavari, joined Tabesh on the stage to pay tribute to Forouzesh.  He talked about the need for new stories and narratives and stressed that the presence of people like Forouzesh is the key to find out how to talk and connect with the younger generation.

Forouzesh’s collection of works in a flower basket was unveiled and he received a tribute diploma and signed his photo, too.