In an interview with Iran Newspaper, the Director of the 33rdInternational Film Festival for Children and Youth, Alireza Tabesh, elaborated on the details of what has been done to hold this edition of the festival in spite of all the difficulties existing in different areas due to the pandemic crisis as well as technical and administrative issues. 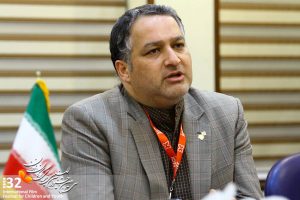 I: Due to the pandemic outbreak and the crisis it has caused in different sectors including cinema industry, many have beenquestioning the idea of holding film festivals, believing that the budget should be spent on the production of cinematic works and to help the hard-hit industry. What were the justifications which convinced you to hold this edition of the festival?

Tabesh: It is not clear for how long we human beings will have to live with this disease. According to WHO, the world may be dealing with the virus for one and a half to two years from now, and it has been recommended that the nations try to cope with the situation, using preventive techniques as well as learning to get used to the new normal. We have lost our best chances to screen the films this year and cinema is not as profitable as it was before the pandemic, so film festivals are the most significant platforms to introduce the cinematic works and they should be held in the most creative ways in order to provide the filmmakers with an opportunity to introduce their latest works, have them reviewed and do the marketing as well. This virtual edition of the festival will say to the world that cinema is alive, and despite the difficulties, the artistic society will always find alternative ways and media to present their works. With this view in mind, we decided to use the cyber space to hold the festival, an important advantage of which is that it is inclusive and public. That is, every Iranian child can watch and judge the films. Although this format will not totally replace the traditional and physical festival, it has been predicted that, considering the current situation, we are going to face a new generation of film festivals, an unknown world that will develop gradually as we all share our experiences to make it the ideal one in the future.

I: What measures have been taken to help the film marketing work now that the festival is not physically being held?

Tabesh: We are going to present the works in the form of a video library through Hashure platform. We actually tried to render the previous edition’s physical market into a virtual one with nearly 400 remarkable Iranian children’s films which can be accessed by Iranian and non-Iranian film distributers after they sign up to the library.

This virtual library can be a great source for VOD platforms which are more focused on now that the children mostly have to stay home. In Collaboration with Farabi Cinematic Foundation, we have prepared a list of children and young adults’ favorite films throughout the last 30 years. Some of the films belong to Farabi Foundation and some are IIDCYA, Hozeh Honari and private sector’s productions. The right owners of the films were encouraged to present their works on these platforms and the films will gradually be distributed through VOD platforms after getting the necessary permissions.

I: This virtual format is offering an opportunity to many Iranian children to watch and judge the films, what measures have been taken to involve the less-privileged children who cannot access technology?

Tabesh: Last year, we had some regions affected by flood and during the festival we sent “portable movie theatres” to 143 parts of the country to screen popular Children and youth films for five days in those regions, and we received positive feedback both from the children and their families. But, now we are dealing with a pandemic. Gathering in enclosed spaces is dangerous for children, and as it is getting cold, we cannot easily handle it in open space either. However, depending on the conditions in different cities and regions, if it is possible for portable movie theatres to work, we will be glad to send them.

I: Why is the idea of “portable movie theatres” limited to the festival days?

Tabesh: There are many deficiencies and many sectors are to be blamed, but if we want to start from somewhere, cinematic complexes, VOD platforms, social networks and NGOs can all help promote the idea of supporting the rights of children and young adults. In this edition, we have presented the jury members with 10 criteria related to children and young adults’ rights and have also asked them to take the Declaration on the Rights of Children into account, as well. During the Fajr Film Festival we always hold the Simorgh and Butterflies ceremonies together, and in the morning, selected children’s films are screened. So, we will have children as our guests for 5 days and that is great. Last year, we transferred the ceremony to Sistan and Baluchestan regions which were flooded. The people active in children’s cinema went there and children warmly welcomed their favorite characters. These are all the miracle of cinema which can bring happiness and hope to children during hard times.

I: Any ideas for introducing characters which belong to the whole nation?

Tabesh: It has always been my dream to have a cinema through which our children get to know something that distinguishes Persian culture from the rest. Of course the narrative, fantasy and imaginative aspects of the children’s cinema should be retained, but it is great to have a global idea presented through a local lens, that is, to have the Iranian cultural atmosphere reflected in children and young adults’ films but say something universal. In that way, we will have international audience who enjoy and recommend watching our productions.