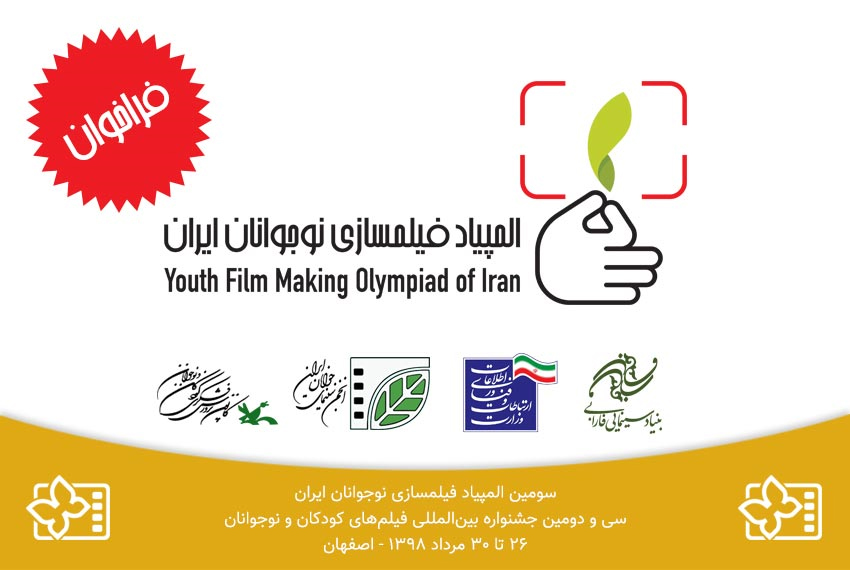 “Third Iranian Filmmaking Olympiad will be held concurrent with the International Children and Youth Film Festival in central province of Isfahan in 2019.

The Olympiad aims to promote moral virtues and hopeful viewpoint with regard to live among teenagers through advocacy and participation in film production, finding new ideas in the cinema of children and adolescents, creating the right conditions for the discovery and introduction of artistic talents of adolescents in the field of the specialized cinema of children and adolescents and pave the way for expanding activities in the field of children’s and youth cinema.

1- Idea: After accepting by the festival selection board, the preliminary plot becomes the general plan of script, which contains beginning, body and ending, in collaboration with the advisor and the creative group.

The Olympiad’s secretariat will hold free of charge workshops tilted “Acquaintance with Cinema” at the offices of the Iranian Youth Cinema for young people who have reached their final stage before the event.

As per the Olympiad call for participation:

The elected participants and participants in the previous Olympiad, subject to age, will be placed in the top priority of the course.

In the Idea section:

In the movie section:

1- The produced films are up to 3 minutes long.

2- The movies could be shot with a regular camera or mobile phone.

3- The fictional, documentary, or animated films could attend the section.

4- The selected films will be screened in the festival in Isfahan.

5-Selected films will be awarded at the Olympiad section.

6- Selected films in “Idea” and “Film” sections will be invited by the Secretariat of the Olympiad to attend the Olympiad Talent Training Camp, which will be held in Isfahan from August 17-21, 2019.

“My Land”, “My Dreams”, “The Dreams of Today’s Children and Adolescents”, “My Family”, “Creativity in Life”, “Children’s Fun”, “Life and Childhood”, “Media Literacy for Children and Youths”, “Hope”,” Forgiveness “and” stories from the books of children and adolescents “(preferably Iranian writers) are the suggested and priority axes of this Olympiad.

After the initial review, the idea of the owners of accepted ideas will be invited to participate in workshops designed for this purpose at the offices of the Iranian Youth Cinema Association throughout the country.

The films produced will be sent to the Secretariat of the Olympiad through the registration portal or the offices of the Iranian Youth Cinema Association.

“The Third Iranian Student Film Student Olympiad will be held from August 17-21, 2019, and the timetable for registration and submission of works in two parts of the idea and short films will be as follows: