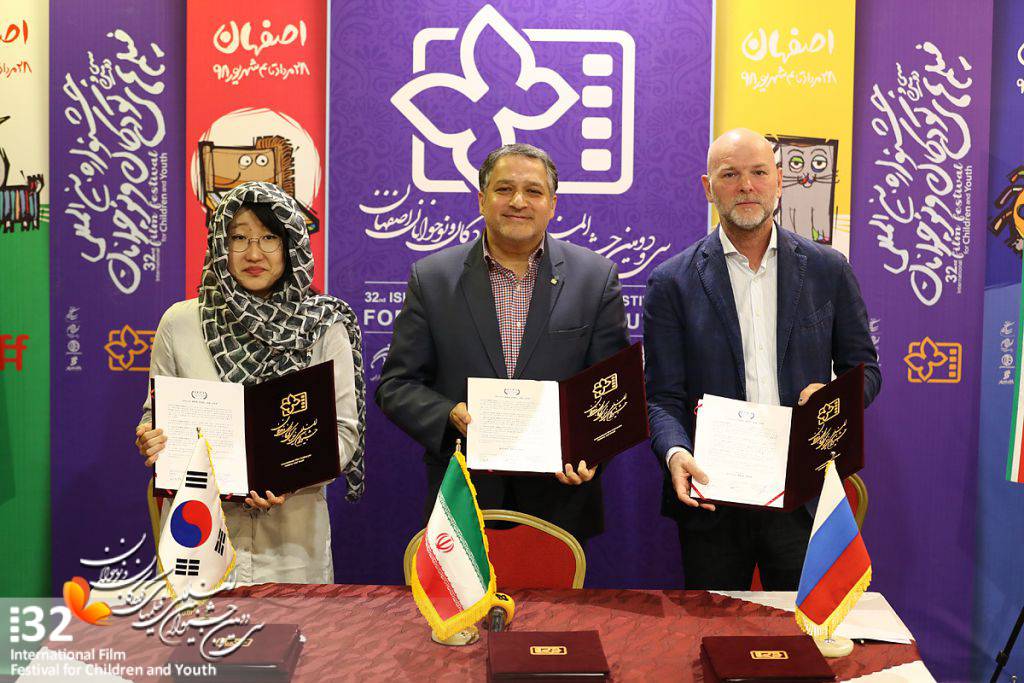 The purpose of the Eurasia Film Festivals Association (EFFA) is to form and broaden relations among film festivals in European and Asian countries through promotion of cultural, professional and content exchanges related to children’s and family films, education and promotion of filmmaking literacy, co-production of live films, animations and documentaries for children and young adults, and public screenings. The principle regulations of the declaration will be implemented mutually by the Asian and European countries, and it will pursue continental goals such as promotion of shared human values (family, friendship, love, talent, creativity, nature, culture, etc.) that give rise to a positive and creative ideology in children and youth.

The document is written in Korean, Russian, Persian and English languages, and all the four versions are considered to be equally authentic.

In pursuit of the objectives shared by Iran’s International Film Festival for Children and Youth, the Russia’s Zero Plus and South Korea’s Guro (hereinafter referred to as the ‘parties’), and given the progress and advances of the children film festival industry in Iran, South Korea and Russia, the three countries are willing to sign an MoU to agree upon their commitments, guided by the principle of trilateral respect, to create more opportunities and grounds for cooperation and collaboration.

The parties of the MoU shall provide the children films produced by the other parties with the right opportunity to participate in their own children film festivals.

The parties shall set the ground for co-production for filmmakers and producers of the country members of the MoU.

Cooperation on implementation and organization of film festivals of the countries that are parties to the MoU with the aim of promotion of the events.

Holding commemoration ceremonies for prominent and influential figures during the film festivals in each country.

Film festivals of all countries shall include sections of review and focus on classic and modern cinemas of other parties.

This MoU shall be valid for a period of two (2) years upon signing, and can be extended for an additional two (2) years at the end of the period upon tacit agreement of all sides, unless notice to terminate in writing is signed and given by one of the parties six (6) months prior to the expiration date.

Zero Plus International Festival of Films For Children & Family Screening