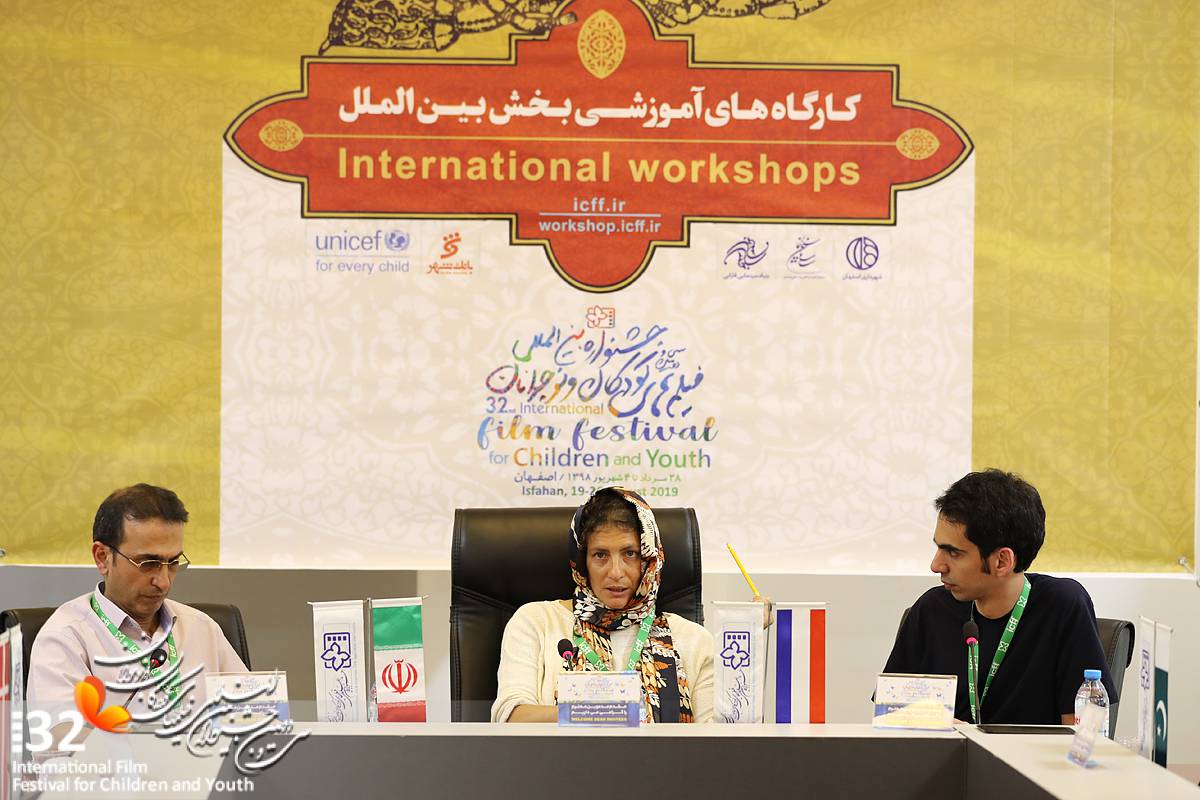 Maud Amson, director of the exhibition part at the Cannes Film Festival presented the third workshop of the 32nd International Film Festival for Children and Youth (IFFCY) titled How to Present Our Film in Global Film Markets.

Noting that sales agents of producers need to meet the international distributors in order to sell their movies, she explained the main stages of the procedure at the prestigious Cannes Film Festival that was established some 60 years ago.

The Film Market (Marche du Film) at the Cannes offers the location to the sales agents to be able to present their products, Amson said adding that she manages the location of film exhibition to the agents that are about 400 every year.

She who is also in charge of advertising and marketing department of the Marche du Film at the Cannes Festival,

The market is annually hosting some 2,000 films watched, presented and submitted, she said, out of which only a small number are sold.

But everyone can submit his or her film to the festival every year in early March, she said adding that for the first time in the world a new type of service was launched to the film producers and filmmakers under the name of Cinefondation Residence.

It gives facilities to young filmmakers who are not residing in France to stay in the country for a six-month period, she noted. The other parts of the Cinefondation is L’Atelier which is concerned with selection of 15 directors, and the part that is related to 20 short films to be screened in Cannes and awarded prizes.

Another initiative be the Cannes Festival is to offer the possibility to young filmmakers to present their short films at the section called Short Film Corner, the director said.

At the corner, she explained, the short films will be accessible for five months since the festival is wrapped up.

She said that an important benefit of the festival is the opportunity to form networks for future cooperation.

There are various programs in the Cannes market, including those allocated to workshops, documentaries, animations and new filmmaking technologies, according to the Cannes Festival official.

Another program is “Goes to Cannes”, she said describing it as a window to other festivals and cinematic events.

Cinando website, she said, is another initiative that the festival has taken in order to set the ground for those who want to keep in touch with the film industry.

At the end of the workshop, Amson answered the queries of young Iranian filmmakers and those who are interested in the industry.

Asked on the unique features of Iranian-made films, such as Islamic clothing, she said that sometimes such characteristics add to the appeal of the films as the audience is interested in learning how the filmmakers have found their way through the constraints to make a good film.

She noted, however, that the first thing that matters with regard to films is the story.

Commenting on the qualities of the films for the Cannes, she said that there is no limitation. “You can make any kind of films with any specifications, but keep in mind that if you make a film characterized by too many native features, it would not have a big audience.”

Amson noted that filmmaking for children is also of particular characteristics, adding that when one decides to make a film, he or she should first determine the target audience.

In the question and answer part of the session, she was asked whether there is any political bias towards the participants and their works in the selection procedure of the Cannes Festival. Amson denounced the reports and assured the audience that only artistic and film-related features will be examined by the jury or board of selection.

The festival’s decisions are based on the views of prominent international experts and artists, she said.

Answering a question on the markets for various type of products for children, Amson said, currently animation is greatly demanded internationally. She noted that the customers are seeking the animations produced by the state-of-the-art techniques and technologies.

Commenting on the effect of the US sanctions against Iran and the inconveniences they have caused for Iranian filmmakers who want to participate in the Cannes Festival, she said that the event is a semi-governmental festival which is sponsored partly by the French government and partly by private sponsors. The director, however, noted that there are teams within the festival that can give advices to the applicants.

The workshop was held on the sidelines of the 32nd edition of the International Film Festival for Children and Youth (IFFCY) that is underway in the Iranian historical city, Isfahan.

The cinematic event is hosting 78 foreign guests from 27 countries.

The IFFCY was officially inaugurated on Monday evening and will be wrapped up on August 26.