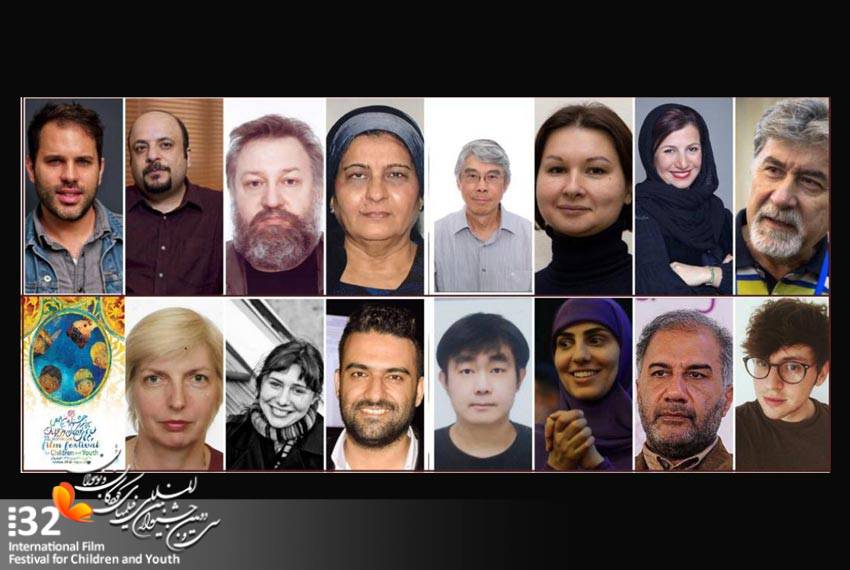 The 32nd International Film Festival for Children and Youth in Isfahan, has announced the jury members for the three international sections of the festival.

The jury members who are slated to select the best films lining up at the festival’s short and feature, Cifej, animation sections.

The top films in Cifej section will be selected by Dragan Fimon Milinkovic, Fatma Aloo and Mohammad Bakhshi.

In a meantime the top animation films would be selected by Alexandre Athane, Izabela   Plucinska, Niels Putman, Mikhail Tumelya and Amir Saharkhiz.

She was born in 1984 in Russia and graduated from Tarbiat Modares University in Russia. In  2003, she started hers career in Tatarstan Radio and Television and also produced several documentaries from 2005 to 2016.

He graduated from Seoul University of the Arts in 2000 and started filmmaking in 1999 with the short film “What Do You Want”, which was screened at the Korea-Japan Youth Film Festival.

In 2011, his short film, “Lonely”, won Best Film at the Daejun Film Festival after being screened at several international festivals. He also won the Best Film Award at the VR Video Content Short Film Festival in 2019.

He was born in China in 1953. He received his master’s degree in fine arts in radio, television and cinema from Temple University. He is a film researcher and author of the documentary “History, Aesthetics, Production and Ethics” (2015). He is also one of China’s best-known filmmakers. Among the titles prepared and directed by him are as follows:

Currently, Da-Ming Lee is a professor and master of fine arts classes at the Hong Kong University Film Academy.

Born in 1961 in Berlin, she studied History and Social Sciences at Humboldt University.

She worked as an editor at GDR television studio until 1991. She has also been a freelance reporter for many television networks, newspapers and cultural magazines in Germany and other countries for the past 25 years. She is a member of the International Federation of Film Critics (FIPRESCI).

Kasir is a Lebanese actor, filmmaker, and TV who was born in 1983. anchor

She completed his master’s and doctorate degrees in acting and theater and in 2011 and has won her first international award at the Al Jazeera Documentary Festival.

In 2015, she was a member of the jury of the Fajr International Film Festival.

She has also played a leading role in many Lebanese films and serials and has been the producer and director of several films and television series and feature films for children and adolescents.

Currently, she is a professor at the Lebanese University of Media, Acting and Directing.

Asgharpour is a graduate of cinema from the Faculty of Voice and Cinema, a producer and director of Iranian cinema. He is also a member of the board of directors and vice president of FIPA (International Federation of Film Producers).

arabi Cinema Foundation, and director Child and the Youth

Film Festival in the 17th and 18th editions.

Rashidi is famous actor, director of theater, cinema and television, and a graduate of the French language translator who has directed many plays so far.

Her first feature appearance was in Ali Hatami’s “Delshodegan “, and “Ta be TA” series in TV.

Born in 1949 in Bosnia and Herzegovina. He studied at Belgrade Drama University and received his master’s degree from the Department of Sociology-Sociology. Following his research in Paris and London, he presented his doctoral thesis entitled “The possibilities of making a film from a novel”.

Currently, he is working as a producer, director and film consultant on many film and television projects. He has also organized many workshops on topics related to cinema, cinema and literature, children’s cinema education, and more. For more than 30 years, He is has been a member of the FICC, CIFEJ, CILECT and several other international film societies and organizations.

In the early 1980s she worked as a journalist for the Daily News in Dar es Salaam and as a radio producer in Uganda. Her ” Maangamizi” feature film received the ZEZE Award for his contribution to the cultural arts in Tanzania.

Her published several works including ” Women’s Encounter with Technology”, “Gender and Development: Poverty in the North, South to North” , “Science and Cyberculture” and “Search for the South”.

Born in 1987 in Rafsanjan, he is a master of theater. He has won more than 120 awards at domestic and foreign festivals, and has participated in more than 350 festivals, including Oscars, Baftas, etc.

He is a French animator and director who was born in 1975. He has worked in the cities of Paris, New York and London.

He made his first short animation, “Zoe Melody”, in 2007. Soon after, Alexander founded his own company called Xing Plant. He is currently working on his project, “The Last Orange”.

Pelosinska was born in 1974 in Kozalin, Poland. She completed his studies in art and film in Poland and Germany.

In 2005she won the Silver Bear at the Berlin Session for the short animated Jam Session and is currently working in her own company. She also holds animation workshops as a lecturer at conferences and festivals.

Putman was born in 1992 in Belgium. He holds two masters degrees including Master of Media Arts from the Royal Institute of Theater, Cinema and Sound in Brussels and  Master of Film Studies and Visual Culture from the University of Antwerp, Belgium.

He is currently the editor of the only specialized short film magazine in Belgium and the director of the NISI MASA European Network for Cinema Negotiations. He is also in charge of the Belgium Short Film Conference – an international organization established since 1970 working to unite the global short film community. He also works as a freelance critic and journalist for several Belgian newspapers and is a planning assistant at festivals such as the Levin Short Film Festival.

In 1985 he worked at the Belarusian Animation Studio. From 1987 to 1989 he studied at the Advanced School of Screenwriting and Directing in Animation.

He has collaborated ion at the Animation Studio AF-Center in Minsk (1989-1999), produced animation and  commercials products for several studios in Moscow, Budapest and Seoul (1999-2002) and was animation lecturer in Minsk, Moscow,

He is currently working independently. He is also an Assistant Professor at the Department of Directing of Television and Cinema of the Belarusian Academy of Arts.

Saharkhiz started his career in animation and visual effects in 1999. His most important works include short animations of “Chat Ironi”, “Alamad” and “Enigma” and visual effects of the series “Mukhtarnameh”, “Flight of Passion” and “Sparrows”, “About Elly”, “Blood Games”, “Sugar Cubes” and so on.

Presided by Alireza Tabesh, the 32nd International Film Festival for Children and Youth is slated to be held in Province of Isfahan on Aug 19-26, 2019 in the national and international sections.