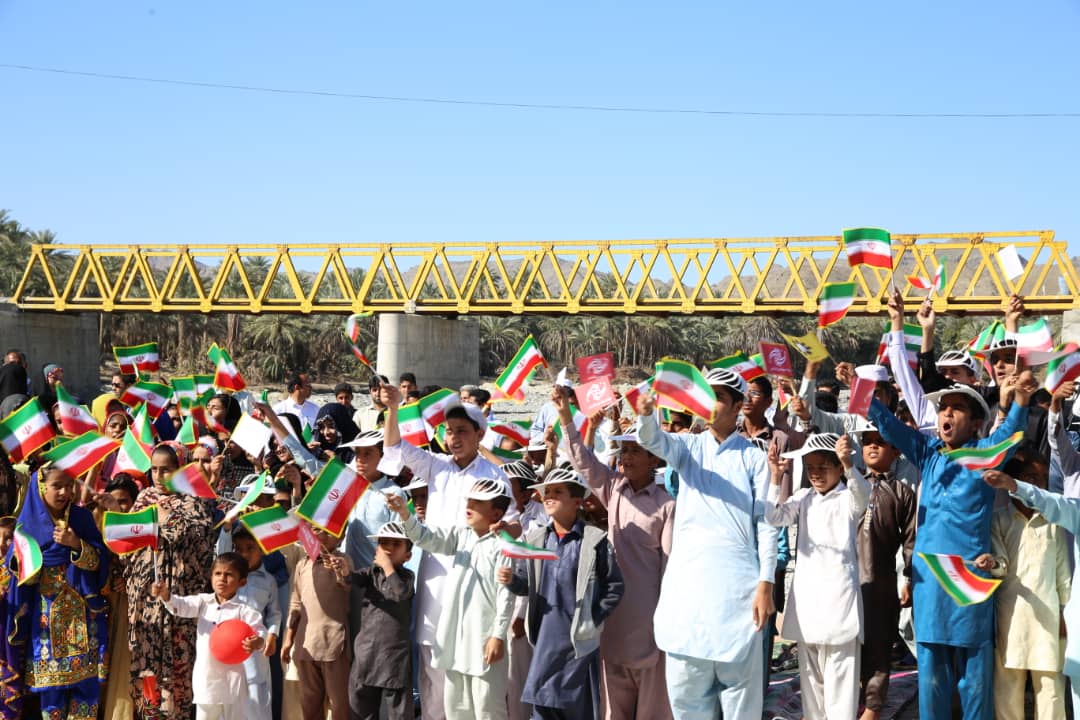 During the Butterfly Simorgh programs, “Sunshine Kids” campaign was held especially in the Chabahar area and the surrounding flood-hit villages, bringing smiles and joy to the children of the region with the help of artists from the children and young adult genre.
“Sunshine Kids” Campaign was held with the presence of artists such as: Pouran Derakhshandeh (Head of the Center for the Development of Children and Young Adult Cinema), Mehran Rajabi, Behnoush Bakhtiari, Seyed Javad Hashemi (Cinema and TV actors), Seyed Mojtaba Zarifian (Uncle Mehraban), Azita Rezai (Aunt Roya) as well as Habib Elbeigi ((Deputy Managing Director of Farabi Cinema Foundation), Hassan Aghakarimi, (Cinema Producer), Mobile Theater of the Intellectual Development Center for Children and Young Adults, Chabahar Ports and Maritime Authority Officials, Majid Qannad and his team ,Hossein Rigi (Filmmaker) and a group of other artists of Sistan and Baluchestan province.
Sunshine Kids Caravan began their journey along with a group of Iranian cinema and television artists and cultural officials in Chabahar on Tuesday, Feb 3,2020. The first destination was the flood-hit Orak village where they had a friendly meeting with children and their families. Afterwards, they had some special events in Polan village in Sistan and Baluchestan province. Performances at the Shahid Beheshti dock also made a memorable night for families and their children. On the second day, the caravan headed to Rask, a town in Sarbaz County to be with the children of this flood- hit deserted village. On their way the caravan also visited the surrounding villages and paid a surprise visit to Hamzeh School.
The third day was a busy day for the vivid members of the caravan. The artists were present in Belpir village in Nikshahr county and performed some joyful shows alongside the river that brought them that ruining flood. The main concern of all the artists in this caravan was the flood struck children and the future of the people of Sistan and Baluchestan, making them work tirelessly to make them happy.
Pouran Derakhshandeh , the filmmaker and the Head of the Center for the Cinema Development of Children and Young adults said: “The Children and Youth Cinema Development Center is planning to make many films, and Sistan and Baluchestan will certainly have a special place in these productions. We request authorities to build a large number of theatres in your province.”
Majid Ghanad, who had put great effort for children in Sistan and Baluchestan, said: “I believe that any official in any position should have a good understanding of the needs of children and young adults in the region and bear not only the educational and intellectual needs of children but also their nutritional and entertainment needs. “
Mehran Rajabi, a film and television actor, also said: “Iranian society consists of diverse but united ethnicities and they feel it is their duty to help wherever they are needed.”
Behnoush Bakhtiari, another guest on the program, said: “Iran belongs to all of us and when something happens to any of our people, it effects all of us.”
Habib Elbeigi, deputy managing director of Farabi Cinema Foundation, said:” Artists will be remembered and immortalized when their behaviors stem from their social responsibility. Seyed Javad Hashemi, cinema and television actor also pointed out that there is no greater concern than the flood-hit people in Sistan and Baluchistan, and the officials must assist.
Sunshine Kids Caravan held joyful programs such as theater, film broadcasting and competition for children of Sistan and Baluchestan with the initiative and support of the Children and Young Adults Cinema Development Center, along with Farabi Cinema Foundation, Chabahar Ports and Maritime Organization, Mobile Theater of Institute for the Intellectual Development of Children and Young Adults.