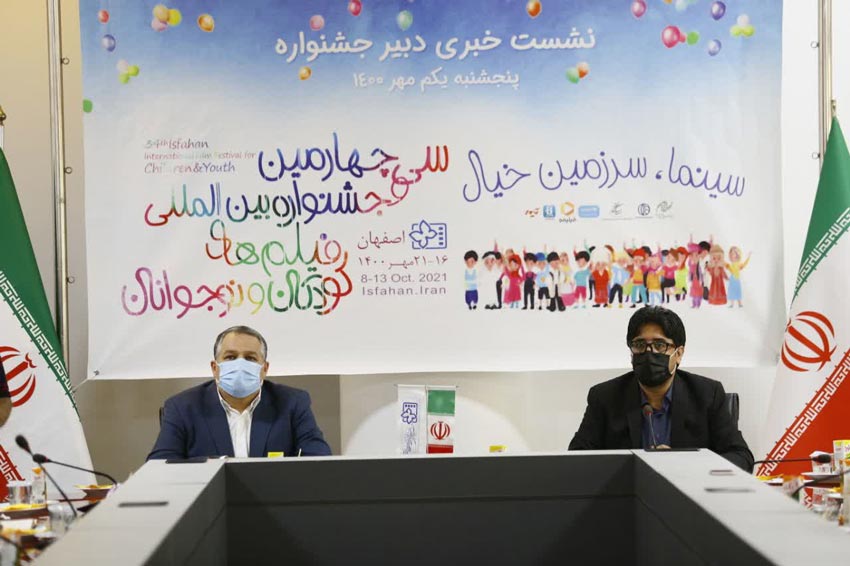 The press conference of the 34th edition of the International Film Festival for Children and Youth’s poster was held in Isfahan province on Thursday attended the Festival Director Alireza Tabesh, organizers and reporters.
Addressing the ceremony, Tabesh commemorated the Sacred Defense Week and paid tribute to the the defenders of health who lost their lives for countering the deadly coronavirus.
He added the motto of this year’s festival is “Cinema, the Land of Imagination”, underscoring that:” our goal was to make the slogan appropriate to the situation of these days.”
“The mission of cinema is to preserve hope. That is why we chose this operational slogan for the festival. Our artists always invite our children to the world of imagination and happiness by visiting the imaginary world,” Tabesh added.
Tabesh continued: “This year, more than 550 works have been submitted to the national and international sections of the festival.”
The secretariat of the International Film Festival for Children and Youth said it has received 556 films so far, including 438 Iranian and 118 foreign movies.
The foreign films include 32 animated and 30 feature-length movies from 32 countries as well as 56 short movies, including 21 short animated and 35 short feature films.
“In the national section, some 440 films from Iranian moviemakers have been submitted to the secretariat of the festival, including 248 short, 119 short animated, 30 feature-length, and 14 feature films, 12 web series, and also 19 corona-narrations.
He then announced the names of the feature films that are to be screened in Tehran and Isfahan from 16 to 21 October in accordance with the protocols and said: “These works will be screened in the Isfahan Festival Palace and other applicant provinces in accordance with the health protocols.”
According to Tabesh, Hamed Jafari, Mahin Javaherian, Reza Dorostkar, Bahram Dehghaniar, Behrouz Shoaib, Galareh Abbasi, and Soheil will judge the national films, adding that several foreign judge from Germany, Chile, and Sweden would judge the international section films in online format.
He added that several judges from Turkey and Afghanistan also will judge short animation films.
Tabesh added that several platforms including Hashur, Tiwa and Filimo will display the films, and the online audiences can watch the works on these three online platforms.
He added that this year the City Centre and Cinema Sahel complex will host the works of this edition of the festival in Isfahan.
Tabesh underscored that three foreign and three national workshops will be held on the sidelines of the festival, adding that in the international section 10 foreign and two Iranian films will compete.
“At least 13 international short works will compete of which three are from Iran and other are from India, Spain, Russia, Lebanon, Croatia, Luxembourg, Slovakia, Estonia, Germany, Russia, Peru, Turkey, Italy and Iceland.
According to Tabesh, this year Ferial Behzad will be the Iranian referee in the CIFEJ section.
He added that as per the Memorandum of Understanding with the Ministry of Culture and Islamic Guidance, the UNICEF judges will judge the Iranian works and one of the works will be awarded.
The 34th edition of the festival will be held from October 8 to 13, 2021, in collaboration with the Iranian Cinema Organization, Farabi Cinematic Foundation, and Isfahan Municipality.
The festival’s movies will be screened in two cities, Tehran and Isfahan, both in an online format and in theaters in compliance with the Coronavirus health protocols.